I used to have a fish in a blender.  It was an old blender that I had taken the blade out of, and it was just a goldfish, but it was seriously awesome.  Total conversation starter.
Like this:
"Is that a fish in your blender?"
"Yup."
"Why?"
"I dunno."

The other day I saw a picture of a fish in a gumball machine and I totally flipped out.  Because, GUESS WHAT?  I've had a gumball machine just sitting around for like 12 years!  I bought it thinking it was the coolest, and then never knew what to do with it.  I've moved it from house to house thinking that SOMEDAY I might do something with it.

AND THEN I DID. 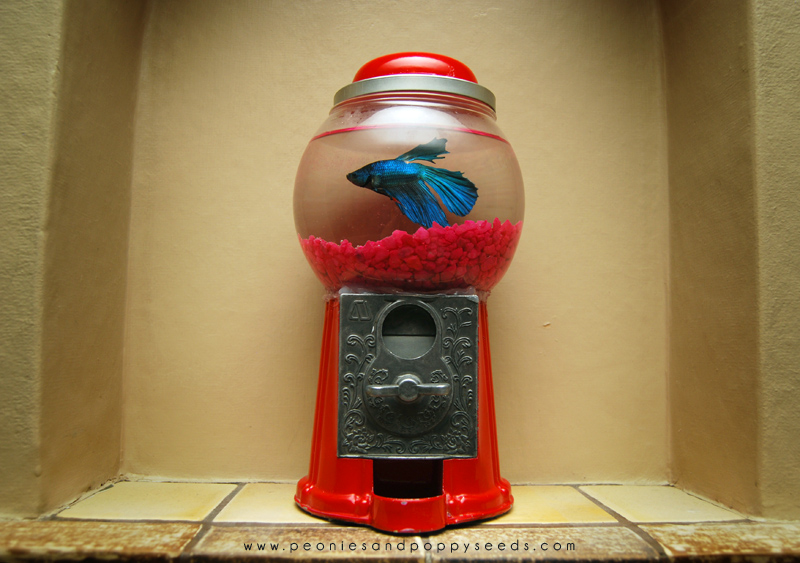 This is how I made it:

First, you need a gumball machine.  And then you have to tell your family that you'll be putting a fish in it.  And then your husband and your 7 year old will gang up on you and tell you that you don't know what you're doing and it will never work.  And then you have to prove them wrong so you can say "What was that?!  I can't...what?  I can't hear you over my 'HA!' of triumph. HA!" 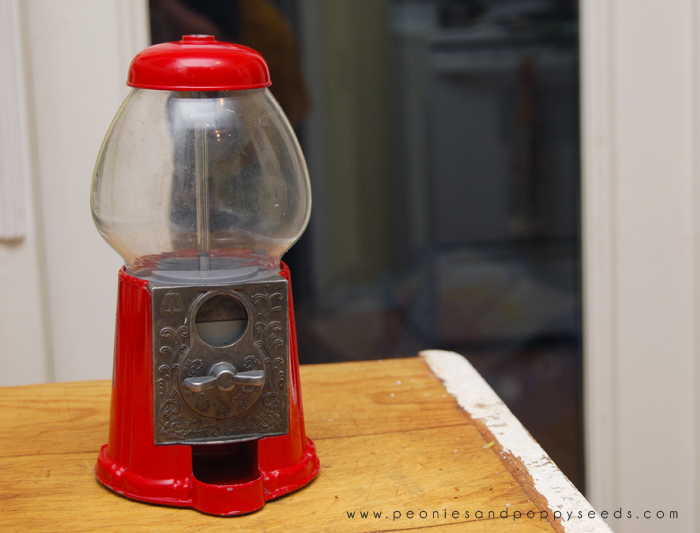 You need to completely gut your machine.  There's more pieces than you'd think. 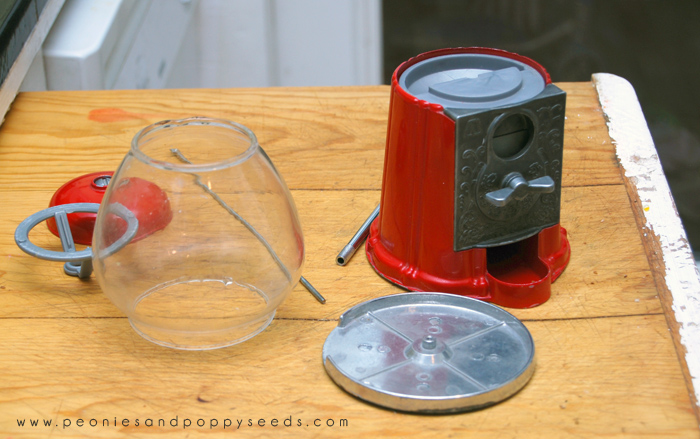 Did you know that even though I've had this gumball machine for over a decade I never knew there were little chickens by the handle until I took this picture?  I'm seriously observant.... 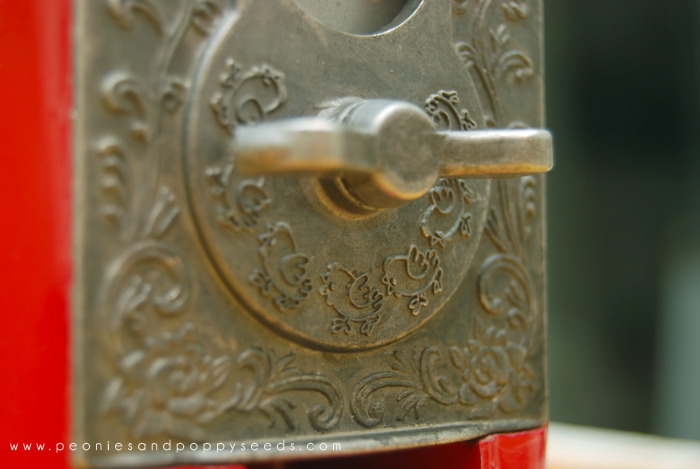 I glued the bottom of my gumball machine back on with some "premium silicone glue".  The bottom is unnecessary, but I wanted it on there.  And hey look, the price tag is still on it. 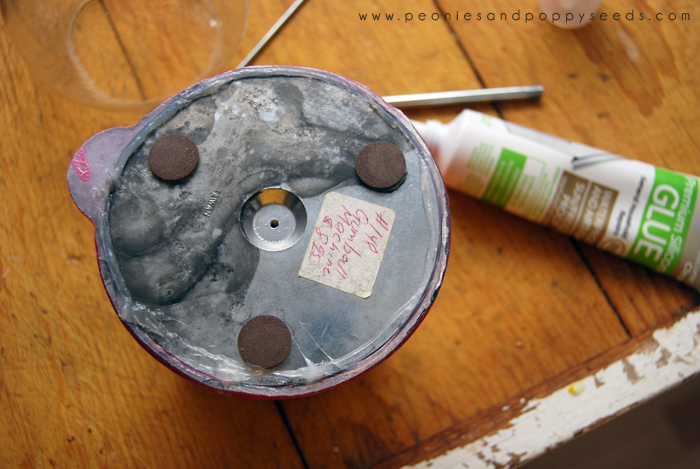 Then I thought and thought about how I was going to seal off the top, because the glass part of gumball machines have a hole in the top and bottom.  I figured I could just plug up the entire hole with the glue, but then I got a better idea and I pulled out a little glass bowl I had gotten at the dollar store.  It sat on top of my gumball machine perfectly, and it was a bit bigger allowing more room for the fish.  So I glued it to the top.  I used lots of glue.  And I put rocks in it while it dried so that it had added pressure. 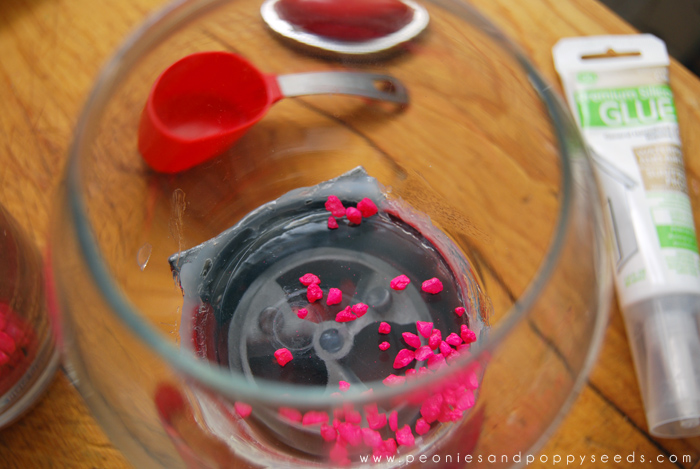 And I did all of this on my nasty kitchen cutting board.  It gives me germaphobic shivers.  I guess that's what you get when you rent a house built in the 30's that has it's original kitchen.  And no - our food NEVER touches this thing.  But it is great for projects, so there's that. 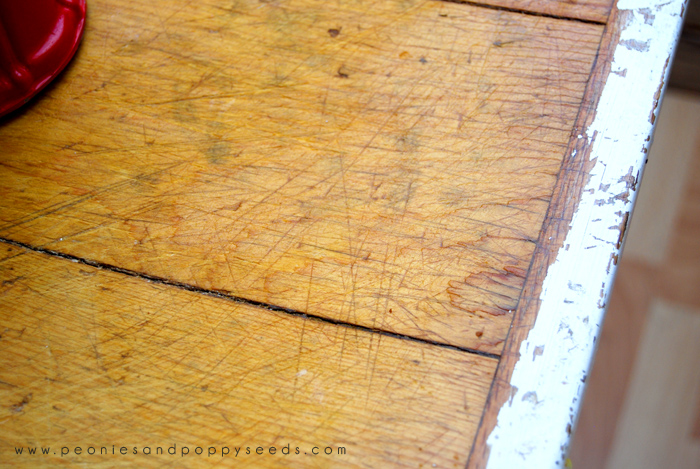 After the glue was set I added water and a fish.  I also wanted to still have the top on my gumball machine, but the opening was bigger than the original glass top, so I improvised by gluing the machine top to a Yankee candle lid I had sitting around.  It worked great.  (Except that we mostly leave it off because the fish needs to breath, but when people come over I can just stick it back on so it looks all impressive like.) 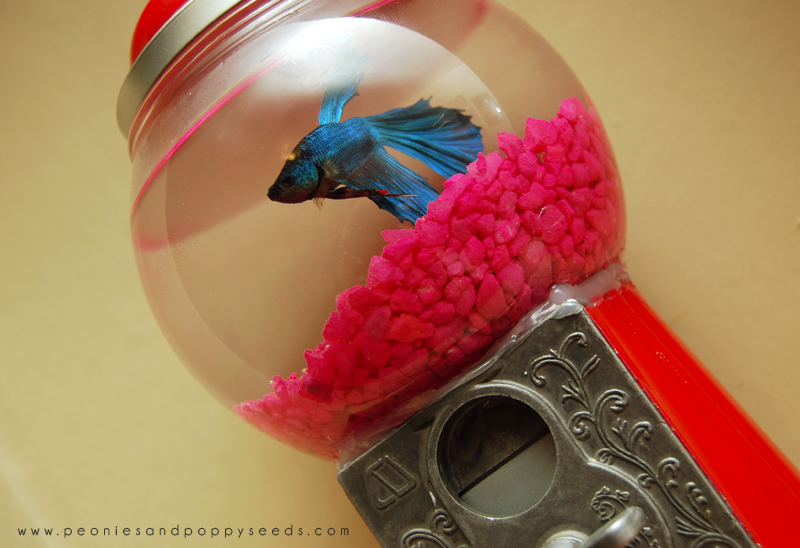 The kids named the fish Night Crawler because they were on an X-Men kick that day.  (I don't really blame them, because I finally saw the latest X-Men movie where James McAvoy plays Professor Xavier, and I have a pretty big crush on him, so yeah,  I LIKED IT.)